Last night me and Frank were headed up to Ikea in Philly and couldn't resist trying out Fette Sau while we were in the area. He's is a big pulled pork lover and I love pretty much all the Stephen Starr eateries so we already had a sneaking suspicion we would both thoroughly enjoy it, and we weren't dissapointed. 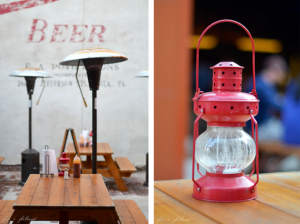 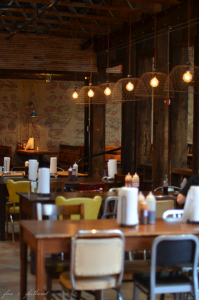 We shared a pound of pulled pork (which we didn't quite finish) and some mushrooms. They give you some rolls with it so you can make yourself a little sandwich if you like, which is nice. Personally, I like my pulled pork with just a little sweet bbq sauce and to eat my roll seperately – I'm a little weird! They have places to sit inside but I'm of the firm belief that if it's nice, and you have the option, you should always choose to sit outside. Just another one of my little oddities. 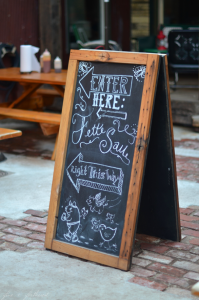 They also had a really cute bar. Neither of us are big drinkers, but part of me just wanted to sit at the bar to admire it's adorableness for a little while. The whole place had a great quirky atmosphere and we loved the food (according to my husband the pulled pork was "northern style" as opposed to southern – I just know it was tasty:). I have a feeling we'll end up here again at least once again before the end of the summer… 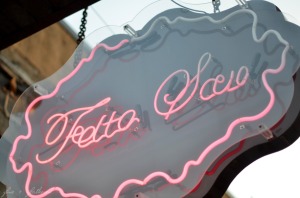 You are currently reading Date Night // Fette Sau at Fine and Feathered.